Home
About
Get There
Register

By Gallaudet University Theatre and Dance Program (other events)

Gallaudet University Theatre and Dance is truly proud to host a free performance by Seña y Verbo: Mexican Theatre of the Deaf's Music For the Eyes (Música para los ojos), followed by a post-performance talkback with the audience.

This performance is appropriate for all audiences of all ages.

This engagement of Seña y Verbo: Teatro de Sordos is made possible through Performing Arts Global Exchange, a program of Mid Atlantic Arts Foundation in partnership with the National Endowment for the Arts.

*Full-time teacher at the National Autonomous University of Mexico (UNAM)

MUSIC FOR THE EYES (Música para los ojos) is the result of the union of two different worlds, the realm of silent images of the Deaf and the intangible universe of music, united by one common language: the Theater.

Captivating and moving for audiences of all ages, this play introduces us to a fascinating and fantastic interplay of sights and sounds. Without the use of voice, Seña y Verbo: Mexican Theatre of the Deaf explores the infinite possibilities provided by the body and the imagination.

In the manner of a small chamber ensemble, three Deaf actors and a Hearing director perform four short scenes inspired by musical pieces by some of the greatest composers that ever lived: Bach, Beethoven, Mendelssohn, and Vivaldi.

The actors, guided by the director, create a dialogue with the music, which transfer the essence of musical language into image and story.

Using a book of drawings in place of a musical score, the actors and director playfully explore the rhythm, punctuation, cadence, and spirit of music that can be seen as well as heard.

Seña y Verbo: Teatro de Sordos (which is literally translated as “Sign and Word: Deaf Theater”) is a one-of-a-kind artistic and educative project in Latin America.

Since its founding in 1993, Seña y Verbo has achieved international recognition for its high-quality theatre and for the impact it has had on Mexico’s Deaf community.

Seña y Verbo: Teatro de Sordos, a professional theater company comprised of Deaf and hearing actors, has presented plays for adults and children throughout the years. In these productions, Mexican Sign Language is combined with spoken Spanish, creating shows enjoyed equally by Deaf and hearing audiences. 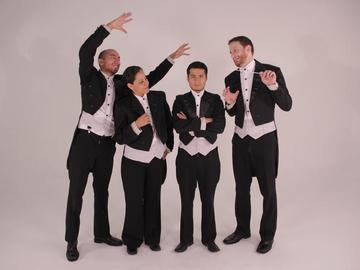 Outside visitors must obtain an e-ticket to be permitted on campus. Please show your e-ticket to the campus public safety officer at the guard kiosk when you drive onto campus. Seating is on a first-come, first-served basis. Please arrive early to facilitate parking and  to select your seat.

NO box office hours and NO tickets at the door.

other events by this organization